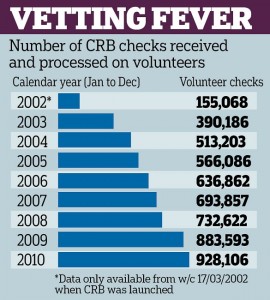 The Daily Mail reported on a press release by the Manifesto Club about the scale of volunteer vetting.  “Figures obtained under the Freedom of Information Act show that almost a million checks were made last year, a six-fold increase since the CRB was launched in 2002.”

The Club, which campaigns against over-regulation, claims that many local authorities – even Tory ones – are still demanding ‘blanket’ vetting of volunteers.   Josie Appleton, director of the Manifesto Club, said: ‘The  Government has made some fine statements criticising over-use  of the CRB checks but these haven’t affected anything on the ground.  ‘CRB checking is leading to the collapse of valuable community services and the loss of the best and most generous volunteers in our communities.’

A Home Office spokesman said the CRB was working to restore ‘proportionality’ to its service and added: ‘We are also clear that there are occasions that these checks are vital to protect public safety.’

An alliance of Sports Governing Bodies are challenging the new definition of Regulated Activity that is emerging from study of the Protection of Freedoms Bill. Some of the proposed details are open to interpretation and will have significant impact on established practice and policies.   For instance :

END_OF_DOCUMENT_TOKEN_TO_BE_REPLACED

A parliamentary question  by Frank Field was answered by Lynne Featherstone and indicated that there were 4,294,977 certificates issued to Registered Bodies in 2009-10.  933,271 applications were for voluntary positions which the CRB issues free of charge.  Full text below  END_OF_DOCUMENT_TOKEN_TO_BE_REPLACED